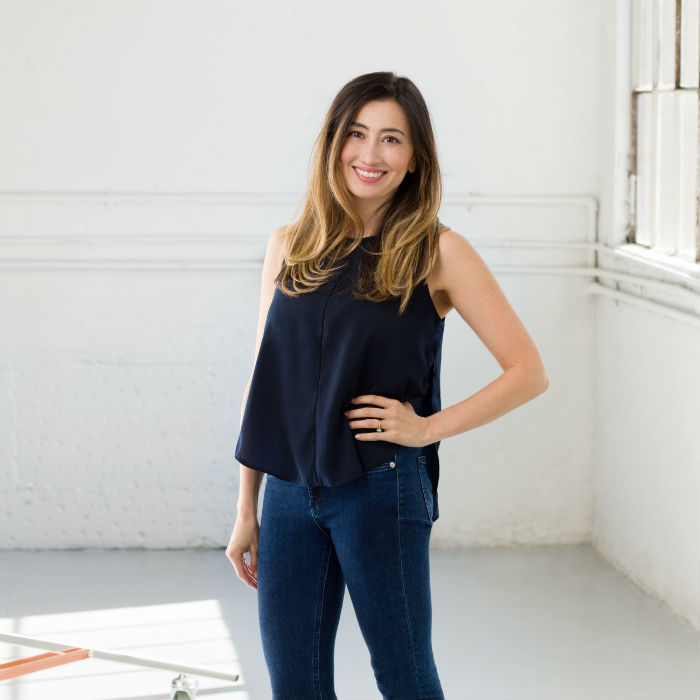 The part of me that loves data knew it could be used to create a better experience with apparel.

Katrina Lake was shipping her first "Fix" boxes before she finished business school at Harvard.

Blended human insight with data to create a service that forced Amazon and other retailers to respond with box services and subscriptions of their own.

While under pressure since its IPO, the company is still generating double-digit sales growth.

Merging technology and human insight into a fashion company is perhaps the founding principle of Stitch Fix. "The part of me that loves data knew it could be used to create a better experience with apparel," Katrina Lake, the company's founder, wrote in the Harvard Business Review. "After all, fit and taste are just a bunch of attributes: waist, inseam, material, color, weight, durability, and pattern. It's all just data."

One of Stitch Fix's main innovations is to combine 3,900 part-time stylists, who pick out customers' boxes and whose recommendations drive the company's sales, with data and analytic prowess. This year Stitch Fix even introduced a digital game where users can rate the company's merchandise, thereby providing it with data in the process. As Lake wrote in the HBR, "Data science isn't woven into our culture; it is our culture."

Stitch Fix Chief Operating Officer Mike Smith, who had previously run operations for Walmart.com, told Retail Dive in an email that Lake approached him while he worked for a company that had "trillions of transactional data points on its customers but had very little data on customers themselves." Stitch Fix, today, collects 90 different points of measurement data from user profiles as well as measurement data on products and feedback data, Smith noted. He added that the company also uses data and algorithms to optimize inventory distribution across its five distribution centers to reduce costs.

"What attracted me to Stitch Fix was Katrina's vision of branching out from purely transactional data and using customer data in ways that would actually benefit the customer — not just the company," Smith said. "She was building something truly customer-centric, a new type of retail model based on listening to and understanding the customer."

Lake, a graduate of Stanford and Harvard's M.B.A. program, launched a personal shopping website in 2011. According to Inc., she was inspired by her sister, a personal shopper who offered her suggestions.

Stitch Fix is still the first and only company Lake has founded. It's one that, early on, a professor said would be an "inventory nightmare" and that a potential investor said he didn't understand the appeal of, as she wrote in HBR. (Lake wasn't Stitch Fix's only founder. As the Wall Street Journal reported last year, Erin Morrison Flynn, co-founded the company but was "scrubbed" from its records except for a footnote, and largely left out of its IPO windfall. According to the Journal, Flynn said in a lawsuit against Lake and Stitch Fix, which was settled, that she co-founded the company with Lake in 2010, though she has not been with the company for more than five years.)

Stitch Fix has been continually growing and expanding its offerings. Revenue has increased in all of the past eight quarters, which is as far back as the company reports. For fiscal 2018 (ended July 2018), Stitch Fix posted $1.2 billion in revenue, a nearly 25% increase over 2017 and a 68% increase over 2016. (The company has also been profitable for three out of the past five years.)

And Stitch Fix, which has 2.7 million clients, just keeps chasing new sales. In this year alone, Stitch Fix has announced an expansion of its men's business and the launch of Stitch Fix Kids, as well as the introduction of Stitch Fix Extras for women. It's also expanding into the United Kingdom. Yet the expectations are high. This fall it reported a quarterly revenue increase of 23%, which disappointed analysts.

About that growth: In October, Stitch Fix was hit with a flurry of lawsuits alleging that the styling service made misleading statements about its growth prospects and advertising plans. The suits alleged that Stitch Fix violated federal securities laws by making false and/or misleading statements about the strength of its active client growth, its television advertising plans and the impact of those on its profit and growth prospects.

Those suits aside, the company's popularization of box and try-before-you-buy services has sparked a host of imitations and competing products. Not least among them is Amazon's apparel box service, Prime Wardrobe, which the e-commerce giant launched last year and expanded to all Prime members this June. A mere test of the service loomed over Stitch Fix's IPO last year. Asked if Stitch Fix saw Prime as a competitive threat, Smith said, "We view our model as being unique in the marketplace."  He added, "Retail is an emotional business, and the success of Stitch Fix is built on our ability to listen to our clients, understand what they're looking for, and continuously improve their experience over time."