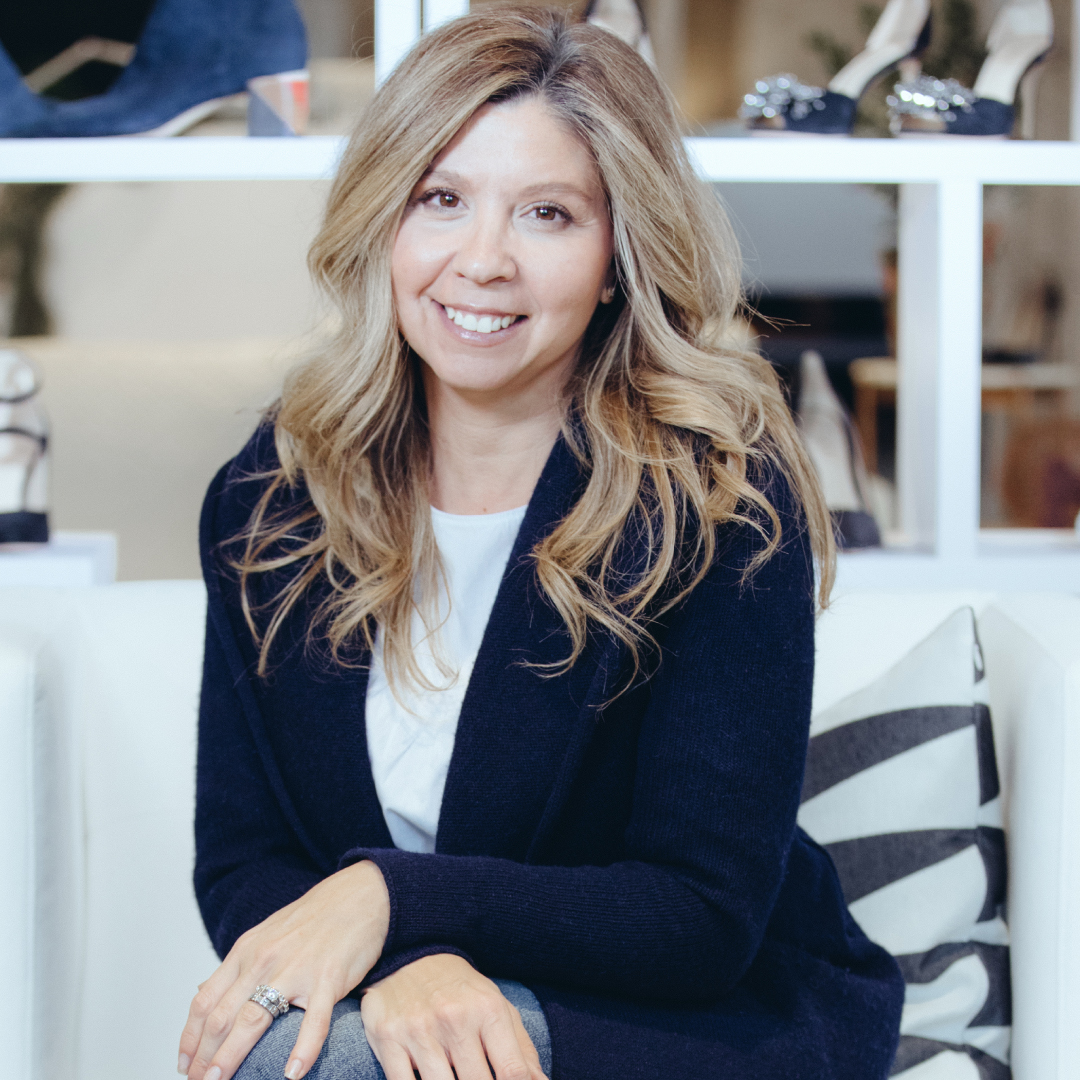 Cheryl KaplanCo-founder and president of M.Gemi

Kaplan has worked at a number of e-commerce businesses over the course of the last two decades, including serving as executive vice president and chief member advocate at flash sales site Ruelala. In 2015, she co-founded M.Gemi with Ruelala co-founder Ben Fischman and footwear veteran Maria Gangemi.

For the most part, shoes aren't a necessity. Even Cheryl Kaplan, co-founder and president of Italian luxury shoe brand M.Gemi, knows that.

"You see them, and then you need them, but you really just want them," she said during a recent on-stage interview in New York City in late October. Since the brand's launch three and a half years ago, weekly small batch drops of luxe Italian-made shoes at a fraction of the price have been essential to making that want feel more like a need.

And in Kaplan's eyes, the model is doing the job, considering the average M.Gemi customer buys four times a year. In an interview with Retail Dive last month, Kaplan pointed down at her two and a half inch python print leather slingbacks (M.Gemi brand, of course). "Part of why we do this heel height is that we got feedback from our customers that the higher heel height was tough," she said, adding that the company's tight customer feedback loop combined with its ability to immediately adjust manufacturing is an indication to her of how "retail isn't dead."

"So to me, e-commerce is … a way to tell a story. It's a way to get product in front of people, but you have to constantly evolve or it is dead," she said. "And so when people used to say that to me – 'retail is dead' – well how could it be? People love buying things, it's just you have to give them what they want."

Just exactly what customers want has changed dramatically since Kaplan entered the e-commerce space nearly 20 years ago to help Nickelodeon build an e-commerce website called Red Rocket (it ultimately shuttered in 2002 after difficulty sustaining business). She later became the vice president of customer experience at SmartBargins.com, an easily forgettable place on the internet to buy everything from coffee makers to sunglasses at a discount.

"[W]hen people used to say that to me – 'retail is dead' – well how could it be? People love buying things, it's just you have to give them what they want."

Co-Founder and President of M.Gemi

There, she met Ben Fischman, another M.Gemi co-founder as well as a serial entrepreneur known for founding retail businesses such as Lids Sports Group and Trade Coffee. The two went on to build flash sales site Ruelala (owner of SmartBargains.com). Shortly after launch, just before the 2008 financial crisis, the company and its ilk, including Gilt Groupe, were hailed as e-commerce disruptors. But limited-time online discounts began to fade out of popularity as Amazon started to consistently offer customers low prices and high convenience. And so, the two executives teamed up with M.Gemi's namesake and footwear veteran Maria Gangemi to move into another white space — direct-to-consumer luxury.

M.Gemi, founded in 2015, is part of a wave of category disruptors like Away, Glossier and Casper that operate a direct-to-consumer model that hinges on slashing prices by cutting out the middleman, fostering brand loyalty on social media and speeding up supply chains.

M.Gemi declined to share sales figures or the number of shoes sold annually, but The Business of Fashion last year estimated the company was close to $50 million in annual revenue in 2017, having doubled sales each year since launch. And it's growth ambitions are not over. M.Gemi has had four physical "fitshop" showroom locations, an on-the-go "Andiamo" shop on wheels and plans to someday expand internationally.

In Kaplan's eyes, M.Gemi's success hinges on a few unique characteristics: an emotional brand story, nimble small batch manufacturing adjusted according to data and a direct relationship with customers.

The storytelling of M.Gemi workshops

No one tells the brand's story better than Gangemi, who was born in Sicily and encapsulates the brand's mission to make Italian luxury more accessible, Kaplan said.

"We're lucky because we built our brand on that authenticity. It's not about just shoes for the sake of shoes but there's a reason behind every shoe and every material that was chosen and where she and the design team were inspired," she said. "So to be able to tell that story, I think it really gives people a connection and a reason to want it beyond, 'I just like it.' It tugs a little at the heartstrings of why it matters."

Italian shoemaking is at the very core of the brand, and it's something that will never be compromised, Kaplan said, adding that M.Gemi works with about 15 boutique Italian shoe making factories to produce all of its shoes. Kaplan recalled being mesmerized by a shoemaker during her most recent visit to one of M.Gemi's partner workshops.

"He has these tiny little nails that he keeps in his mouth and one by one he takes them and puts them through his teeth so he doesn't have to stop and pick one up and put it down." she said. "It's all of those little crafts, that's the tricks. It's how they do those things and that's family, generational, passed down."

"You have to have amazing product and you have to build a great brand. And if you don't do those two things, it doesn't really matter whether you're direct-to-consumer or otherwise."

Co-Founder and President of M.Gemi

Those are the very same factories being used by household luxury names, Kaplan said. But, the reason M.Gemi can sell at an average price point of $350, versus $800 or more for namebrand luxury, is because of its direct-to-consumer model that cuts out massive marketing costs.

"When we say made by hand, we mean every piece. it's not like the leather is Italian and then we make it somewhere else," she said. "So, everything is the same as luxury minus the price point."

What's most unique about M.Gemi comes back to its signature Monday drop. Each week, the brand preshops the look with its best customers and on Instagram, and by the next day opens up sales to all customers. "By Monday afternoon we can already tell how that shoe is going to do for its life cycle," which granted is a short one, considering all M.Gemi shoes are limited-edition. Using predictive modeling from its data science team, the company goes back to the workshop and places another order for specific colors and sizes.

To Kaplan, the consistent stream of small orders is better for workshop partners as well. "Every month we're giving them projections and product to make, and so it's more steady and that's an easier way to run a business and employ people."

In the beginning, the direct-to-consumer model was critically important to the brand story, Kaplan said, but it's not the future for all brands. "That may be the channel in which we sell, but the table stakes are still the same. You have to have amazing product and you have to build a great brand," she said. "And if you don't do those two things, it doesn't really matter whether you're direct-to-consumer or otherwise."

Stepping into the physical world

Like many direct-to-consumer startups moving past their first few years, M.Gemi is conscious of the need for a physical presence. Most consumers still want to touch and feel a product before purchasing, especially in categories where fit is make or break.

In 2016, the brand debuted its first fitshop in New York's SoHo neighborhood. Similar to the Bonobos model, the location serves as a guideshop where shoppers can browse and try on styles. But, unlike most stores, there's only one size of every shoe in one color, and (barring some exceptions) customers can't take them home same-day. Instead, orders placed in-store (and online for that matter) are shipped free of charge in between one and three business days. The brand also offers free returns and exchanges.

M.Gemi has had four fitshops (two in Boston, one temporary but now closed standalone in SoHo and another in the New York City Bloomingdale's). It also has a quirky store on wheels known as "Andiamo" (Italian for "Let's go!"). Last summer, a small M.Gemi team roadtripped across the Northeast to test out various markets. Kaplan said she learned a lot from the experience, including the fact that lifestyle centers are far superior to typical malls.

That doesn't come as a surprise, considering the fate of many c-class malls and the way that better performing shopping centers are increasingly leaning in to lifestyle developments that include restaurants, fitness centers and entertainment.

Kaplan views stores in a similar way to many digitally native executives — as just another marketing channel. Sometimes M.Gemi customers are in stores, she said, other times they're on Instagram. Both arenas are critical places to meet customers where they are, but the experience should be seamless no matter where the interaction is taking place, she said.

"I think service is one of those things that people get when it's authentic and real. It makes a difference," she said, adding that all customer service, including an online chat option, is handled by people, not chatbots. That's important because some of M.Gemi's best customers have started out with a negative experience. "What could be bad is all about how you recover," she said. "It's not about the mistake and that's a life lesson. But brands are no different."

In stores, that means store associates aren't just stocking shelves. They're "storytellers," Kaplan said. "In my past, people were very concerned about call-to-order ratio and how long were you on the phone. If clients come in and try on 20 pairs of shoes and stay for a half hour, that's a win," she said. "So, the most important asset is finding people who know how to build relationships with people not sell shoes."

One foot in front of the other

In many ways, M.Gemi is shaking up a sleepy but bountiful $18 billion global luxury shoe market. But, unlike some startups, it's not using emerging technology to do so. To Kaplan, virtual reality, augmented reality and artificial intelligence aren't things the brand is focusing on in its next stage.

"I want to make sure they're working on things that are innovative and brand enhancing and experience enhancing versus keeping the lights on," she said.

Monday drops will continue to be a staple as the company looks to expand internationally as a lifestyle brand. M.Gemi, which has an office in Florence, is still in the process of researching markets with "a sensational appetite for Italian product," Kaplan said.

"In order to stand out we have to continue to reinvent how we tell our story, how we show our product, where we do it. You can never sort of coast," she said. "It's like, that worked yesterday, how do we continue to evolve that so we're staying ahead of the curve?"

Get Retail Dive in your inbox