With bricks-and-mortar sales continuing to decline, social selling is poised to alter the current retail model by facilitating purchases seamlessly through branded communication.

French atelier Christian Dior recently tried its hand at social selling by offering its followers on Chinese messaging and social application WeChat the opportunity to purchase a limited-edition handbag directly through a post. While not alone in its WeChat efforts, Dior has become the first luxury house to sell a high-end handbag through the app, showing its potential for direct-to-consumer sales.

“While social selling represents another sales channel for retail, its impact on total sales has been very minimal and it’s not a ‘silver bullet’ to retail success,” said David Naumann, vice president of marketing at Boston Retail Partners.

“Retailers will continue to experiment with different social media campaigns across multiple social media platforms where their target audience is active and concentrate on the ones that are most successful,” he said. “The recent success Dior experienced with its WeChat campaign of limited-edition handbags in China was phenomenal.

“According to a BI Intelligence report, 90 percent of WeChat users are in China with nearly 700 million users based in China.”

Mr. Naumann is not affiliated with Dior, but agreed to comment as an industry expert.

Dior was unable to comment directly by press deadline.

Dior began its promotion for the limited-edition Lady Dior handbag on Monday, Aug. 8, the day prior to Qixi. To promote the sale Dior posted the information to the WeChat Moments feature through its official account. 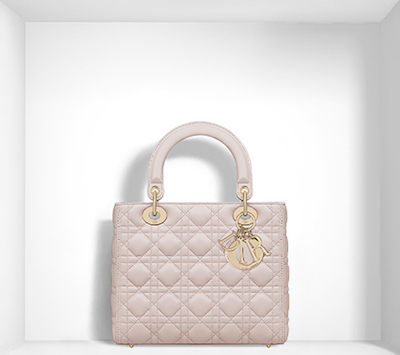 To increase interest in the Lady Dior handbags, Dior included a customizable element to its promotions. Consumers could add metal badges to the light pink handbag’s shoulder strap by dragging pictures of decorations onto the bag.

Dior included a red heart and floral designs as decoration options to keep with the Qixi Valentine’s Day theme.

The atelier had expected to keep the limited-edition handbag sale posted through Thursday, Aug. 11, but by Tuesday, Aug. 9, only a day after posting the promotion, the handbags sold out.

Dior listed the Lady Dior limited-edition for 28,000 yuan or $4,210 at current exchange rates. For ease of purchase, consumers were able to buy the handbag directly through WeChat.

Currently, Dior does not offer its own ecommerce and only sells its handbags in its boutiques and authorized retailers. 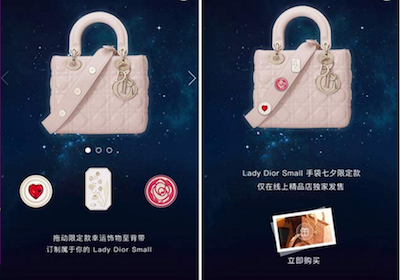 According to a report by Ruder Finn and the Consumer Search Group, Chinese consumers are becoming more comfortable buying online. Across China, shoppers now visit stores an average of two times to view products in-person before making a purchase. This is down from last year, when Mainland clients made 2.3 visits and Hong Kong consumers 2.6.

Also, a sense of cultural familiarity is also appealing to Chinese consumers as they are selecting merchandise or services. While only 11 percent of Hong Kong consumers say that Chinese elements are extremely or very important in a purchase, 58 percent of Mainland shoppers said they value it highly (see story).

You’ve got potential
While Dior is certainly not alone in its WeChat efforts, with brands such as Michael Kors, Chloé and Montblanc tapping its potential as well, the app offers underused direct-marketing possibilities for luxury brands.

Per an L2 report, brands in the fashion and watches and jewelry categories receive an average of 7,000 views per WeChat post, a pittance against the 700 million monthly users. Rather than using WeChat in ways similar to Instagram, Facebook and Twitter, brands should take advantage of its one-to-one communication interface for CRM purposes, to encourage loyalty or drive online-to-offline activity.

Brands are also not leveraging WeChat payment or coupons, and while loyalty program integration is growing fast, rates are still low (see story).

For instance, French menswear house Berluti is introducing its Fast Track footwear to Chinese consumers through a contest exclusive to WeChat.

Through a microsite on the social platform, consumers can read profiles of three local ambassadors and vote for their favorite style from the line for a chance to win a pair of shoes. Localized campaigns offer brands the opportunity to reach consumers with content and promotions that cater to them, making it all the more likely that it will resonate with the intended audience (see story).

“The exclusive nature of the limited-edition Dior handbags was likely the key to the huge success of the WeChat campaign,” he said. “Future WeChat campaigns for regular products will need a special hook or incentive to inspire consumers to respond.”