​It's the worst year ever for denim — and this week, it got even worse.

From Barney’s nearly $1,000 inside-out jeans to Levi's $1,261 "bare-butt" jeans, denim is officially having its worst year ever.

This week, the denim crisis got even worse: Nordstrom made a valiant effort to top these dreadful duds with $425 mud-caked jeans. But it didn't stop there. After its debacle with clear knee jeans, TopShop launched a pair of $100 completely clear plastic jeans.

This, and more, in this week's Retail Therapy.

Just when you think denim can’t possibly get any worse this year, Nordstrom began selling a pair of $425 Men's jeans this week that look like they were pulled out from a manure-filled dumpster outside of a rodeo.

The department store retailer — which was most recently mocked on social media for selling TopShop's bizarre Clear Panel Mom Jeans ​— describes the “Barracuda Straight Leg Jeans” on its website as: “Americana workwear that's seen some hard-working action with a crackled, caked-on muddy coating that shows you're not afraid to get down and dirty.”

Yes, the jeans are quite literally decorated with fake mud to make it appear as if you've been hard at work on the ranch or something — presumably roping cows, building fences or something equally "manly."

Shoppers allergic to hard work may have to pony up quite a bit to achieve this look, but, hey, at least you can expect free shipping, amirite? What a deal.

Faded jeans with holes in them used to sound like the dumbest idea of all time, so fake mud jeans will probably make billions. @Nordstrom

As news of Nordstrom's luxuriously muddy jeans buzzed this week, Reebok stepped in with a tongue-in-cheek response — listing on its website its own $425 soiled article of clothing... an "authentic" sweaty T-shirt.

"We’re putting in the hard work for you and giving you a pre-sweated tee for that post-workout look and smell," so reads the product description. But the shirt, marked as "sold out" on the athletic retailer's website, was actually never for sale, a company spokesperson told Mashable.

While Reebok may not have literally cashed in on this joke, it did find a humorous (and free) way to boost its social media engaged. Well played, Reebok. 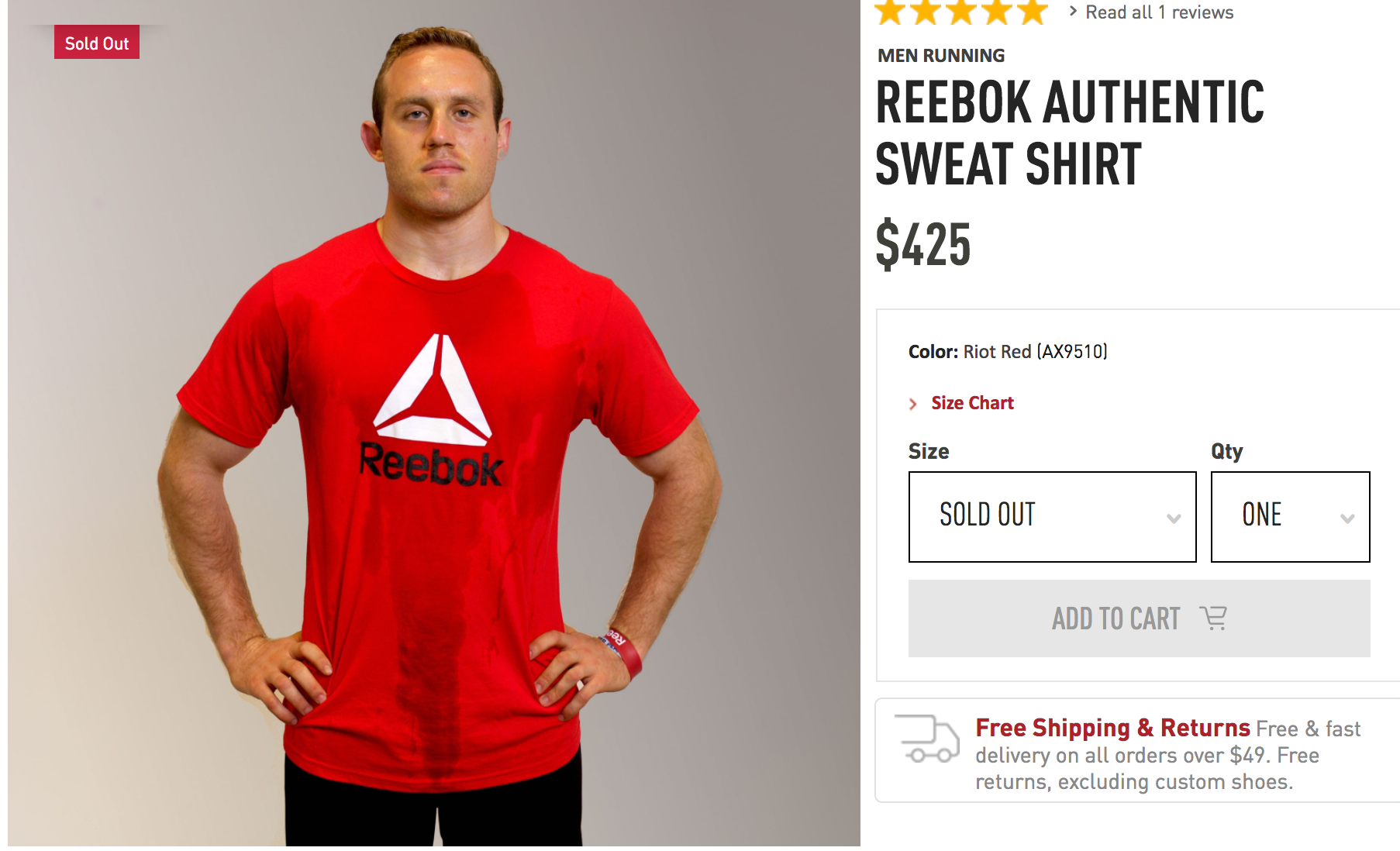 The case of the terrible jeans doesn't stop there this week. Remember TopShop's Clear Panel Mom Jeans that cracked up the internet last month? Well, the brand is going all-in on the clear jeans look with its "MOTO Clear Plastic Straight Leg Jeans."

The "jeans," which are actually made of 100% Polyurethane, retail for $100. You may be wondering what on earth you could possibly pair with clear, plastic pants, but apparently the look is "ideal as a statement piece for a festival or costume party, take the look to the extreme with a bikini and sequin jacket or dress down, layered under an oversized jumper or asymmetric hem dress," according to Topshop.

The product description warns the garment should be wiped clean only, which could be viewed as a time saver for millennials who want to clean their apartment and their pants at the same time.

While some turned to social media to rant about the new look, at least one person nailed the brand's marketing scheme on the head.

​If you build it, they will come.

But unlike what happens in the 1989 classic film "Field of Dreams," consumers did not come running when Wal-Mart concocted the "crotilla" — mostly because they had no idea what it was or why they would ever want it.

The big-box retailer began selling the product — a mashup between a croissant and a tortilla — earlier this week, and even rolled out an elaborate campaign to market the wannabe trendy snack. On Tuesday, now forever known as #NationalCrotillaDay, Wal-Mart store associates explained the product on Facebook live as they taste-tested variations on the original creation.

Sadly, the hashtag was hardly used and many turned to Twitter instead to mock the confusing product. Don't feel bad Wal-Mart, food hybrids are often fleeting. Remember the cragel?

According to these people, April 25th is "National I Drove Over My Croissant With My Car Day." https://t.co/I0FFsuS6rv

They were so preoccupied with whether or not they could, they didn’t stop to think if they should.